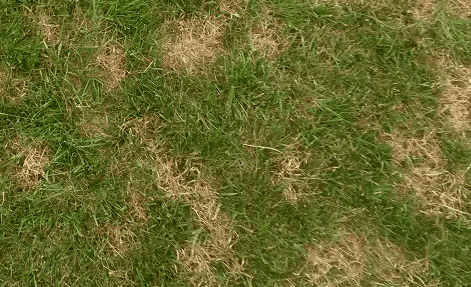 Brown Patch In Your Lawn

Brown Patch In Your Lawn

It’s summertime, and with the high temperatures and humidity comes Brown Patch.  Brown Patch is a fungal disease named Rhizoctonia solani, which occurs in a wide range of turf grass varieties.  The fungus causes spots to occur on the blades of grass.  As the fungus progresses, the spots will begin to spread more rapidly and eventually kill the entire blade of grass.  Brown Patch spreads in an irregular, sometimes circular pattern that will appear sunken as the grass dies and collapses.

Brown Patch becomes active in the spring when temperatures get around 70.  It does most of it’s spreading and damage once the temperatures get in the mid 80’s or higher and the nights stay above 70.  During this time, if the lawn is cut low you can sometimes see the fungus in the early morning as a blue/grey smoke ring around the periphery of the patch.

Water : Too much moisture on the lawn at night can increase the occurrence and spread of Brown Patch.  It is important, to water early enough in the day so that the grass can dry off before night fall.   It also helps to water deeply but infrequently.

Fertilizer : Over use of fertilizers with a lot of fast release Nitrogen during the hot summer can increase the growth and spread of the fungus.

Air Flow : Lack of proper aeration increases the amount of time that the soil and grass stay moist.  This creates conditions that favor the growth and spread of the fungus.  You can increase airflow with Aeration and De-thatching in the cooler seasons.   Aeration will also improve the drainage of the soil.  The fungus can also over winter in the thatch layer, so removing the thatch can help with control.

Mowing : Mowing when it’s hot and humid can increase the spread of the fungus with the mower blade and by foot traffic.

If Brown Patch has been a problem in the past, or you detect it early on, you can get some effective control with some Fungicides.  The key is to apply the fungicides before the damage occurs.  If the damage is already occurring, you can slow down the spread and prevent further damage.

Using Fungicides with the active ingredients : Thiophanate methyl, Chlorothalonil or Propiconazole  on a weekly or bi-weekly application can give good control.

For Some More Information On Turfgrass Diseases click HERE

How To Decorate Live Christmas Wreaths With Fresh Greens