Previous Next
The Victory Garden – Pt. 4 – Planning The Plot

The Victory Garden- Planning the Plot

Planning your garden may be the most challenging part of your food independence journey, but our Willow Ridge experts are always here to guide you.

Vegetables…so many choices and those glossy seed catalogs make you want to plant one of everything, right?

Unusual varieties like white tomatoes or scorching hot peppers are tempting and a lot of fun but, the Victory Garden was, and is, about one thing…necessity.  If you are lucky enough to have unlimited space, we encourage you to try a few crazy and fun varieties! But when space is at a premium, you may want to stick with the tried and true basics. 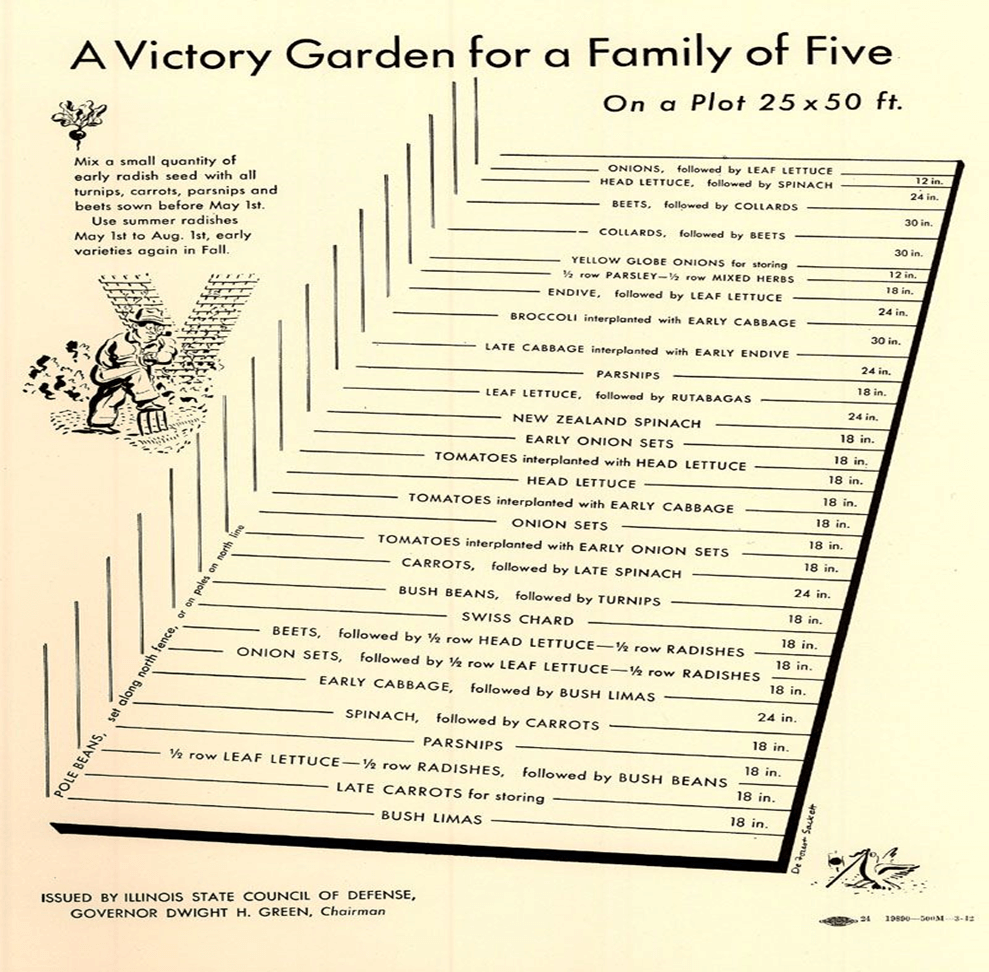 Again, we will go back to 1942 and take a look at the 25×50 ft. Victory Garden plan for a family of 5.  You may be wondering how this garden will feed five people when in a previous post we told you that you need a plot half this size for just one person.  The answer lies in the type of vegetables that were planted in this diagram. You will notice there are no corn plants, no squash, and no trailing vegetables such cucumbers. This plan only included vegetables with a relatively small footprint.

The other thing to note is the small space between the rows.  Most are a mere 18” which maximizes space and also helps with weed control!

And when it comes to maximizing space, think about going vertical whenever possible.  As you can see on the diagram, there is a continuous row of pole beans running down the north side of the plot. If possible, it’s a great idea to position your garden next to a fence that can double as a support for vegetables that can reach up such as cucumbers, melons, or winter squashes.

Additionally, take a moment and look at the logic behind each vegetable that was planted. Vegetables, and their different varieties, can be categorized in several ways.

Long Season or short season, early- mid and late harvest, heavy feeders, or light feeders. In order to make the most of your space and keep your soil at optimum health, you will need to take this into consideration in your plan. It is especially important when we talk about crop rotation. So why do these categories matter?

Let’s look at slicing tomatoes as an example. They are a long season plant that takes a full season to grow before harvest. They are also traditionally very heavy feeders. In Tennessee, we normally plant tomatoes after the last frost date which is April 15th. Tomatoes, like most other fruit and vegetable plants, are available in early; mid and late harvest varieties, which means that if you plant all three types, you can pick fresh slicing tomatoes from 60-80 days after they have been planted. However, because they are long season they require a large root space and a high amount of nutrients to support the plants feeding requirements. Heavy feeders will deplete the soil by the end of the season which can open your garden up to all sorts of disease problems, so when it’s time to remove tomatoes and plant your fall crops, you don’t want to replace them with another long season, heavy feeder such as Brussel sprouts. In this case, a good choice would be a few rows of fall peas or green beans who are not only short season, light feeders, but legumes also fix nitrogen in the soil from the nodules on their roots which help to replenish your soil, but more on crop rotation and soil health later.

This is just one example, and we will take a much deeper dive into vegetable types, but I’m hoping it clarifies why the planning stage is so important to a successful Victory garden. We want to plant in a very thoughtful way as to not stress the soil which in the end, will only lead to more physical and monetary output for the gardener.

Below we have compiled a list of the most common vegetables and their traits to help get you started on your plan. As always if you have questions never hesitate to ask!

Part 5 of The Victory Garden – Building The Plot