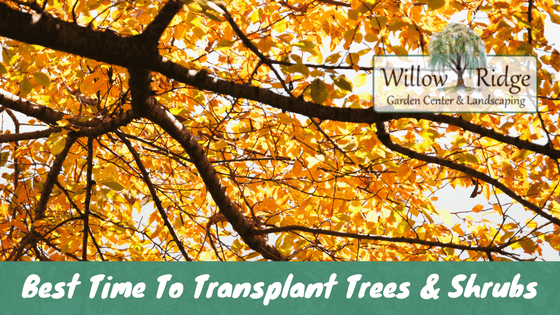 As we move further into Fall, the temperatures are dropping and so are the leaves.  Leaf fall is a good sign that trees and shrubs are beginning to go dormant for the season.  Did you have plants in your landscaping that struggled this year?  If you did, it might be due to the fact that they are in the wrong spot.  Maybe the light or moisture conditions have changed or it just got put in the wrong spot to begin with.  A little research on the varieties might help you figure it out.  If you decide that it would be better in another spot, now is the time to begin thinking about moving it.  When the leaves have finished dropping in the late Fall, it is the best time to transplant trees and shrubs.

There are several reasons why late Fall is the best time to transplant trees and shrubs.

When transplanting trees and shrubs, it is important to preserve as much of the root system as you can.  A general rule of thumb is to dig 18″-24″ out from the trunk and 18″-24″ deep.  Start by digging a trench around the outside edge, this will allow you too see if the root system extends that far or if you can come in closer to the trunk.  If the soil is dry, water before you start digging.  This will make the root ball heavier, but will prevent the root ball from crumbling and breaking off the small feeder roots.

One tip is to get a sheet or burlap sack, and slide the root ball onto it.  That way you can drag it or carry it with help to further limit the damage.  You can also trim back the tree or shrub to reduce the amount of foliage it will have to support in the Spring.

Preparing the new site by digging a proper hole and amending the soil will also increase the chances of good results.  Water the plant in well after transplanting and keep it moist throughout the Winter.