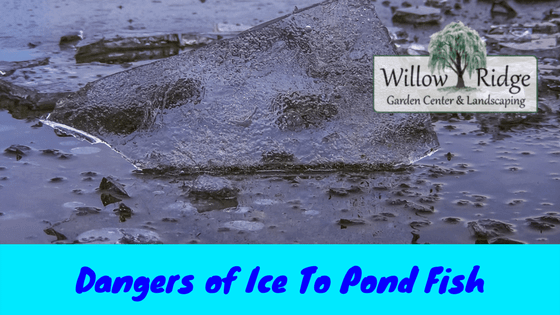 Dangers of Ice to Pond Fish

Dangers of Ice to Pond Fish

During the winter months you need to be aware of the dangers of ice to pond fish.  Ice forming over your pond can become an issue and it is important to maintain a hole in the ice to allow noxious gases to be released and keep your fish from suffocating under the ice. But, the way in which you maintain that hole is more important than most people realize.

When I was about 16 I became a certified scuba diver. It is common practice for divers to carry a small clicker. The clicker is used to draw the attention of other divers so that you can use hand signals to communicate. The clicker is a great tool because it can be used from yards away but sound to you like it is right next to your ear. I am sure you have noticed the way sound travels differently under water than it does on land. This is because of the way sound vibrations create motion in the water.

Have you ever seen the way fish react when you tap on aquarium glass? Just as sound works differently under water, fish also hear differently. Think of how dolphins navigate and communicate over vast distances using biological sonar. Fish are like living motion detectors. They use sensitive hearing to tell what is going on in there surroundings. The motion of a shark swimming behind them creates a low frequency sound that is picked up by the fish’s ear and they react.

If a fish can pick up the subtle sound of a shark gliding through the ocean, how do you think they will be affected by a sludge hammer breaking ice on the surface of your pond? At the very least it can cause sever tissue damage, which can then result in deafness and/or weaken their immune system allowing for infections and other fish ailments. Worst case scenario it can scare them to death. I mean that literally. You could startle them so severely that their poor little hearts give out.

Breaking is only one way of dealing with the dangers of ice to pond fish.  Another thing to avoid is pouring hot water in the pond to try to melt the ice. A rapid change in water temperature can cause your fish to go into shock which is just as dangerous as a hammer. The best option for creating a hole in ice that has already formed is to heat a pot of water, but rather than pouring it on the ice, set the pot of boiled water on top of the ice and let it slowly melt through. Then remove it without spilling the hot water in the pond. A better option is to be preemptive by putting in a deicer or and a large aerator, preferably both. This will keep ice from forming wherever you place them in the pond.

Another quick tip for fish care. Temperature fluctuates all the time in east TN. It may be below freezing one week and in the sixties the next week. When the temperatures rise quickly this way your fish may get more active and you may be tempted to feed them. Please avoid giving them a lot of food as soon as the weather improves. Your fishes’ digestive system will not be ready to handle much if any food. If you give them too much all at once it can cause their stomachs to burst, sometimes within moments. Stick with a very small amount of cheerios or special cold-water food until the warm weather is here to stay. Catch you downstream.

Helpful or Hindrance: Pond Plants In Your Water Feature

How Many Pond Fish Is Too Many Fish?